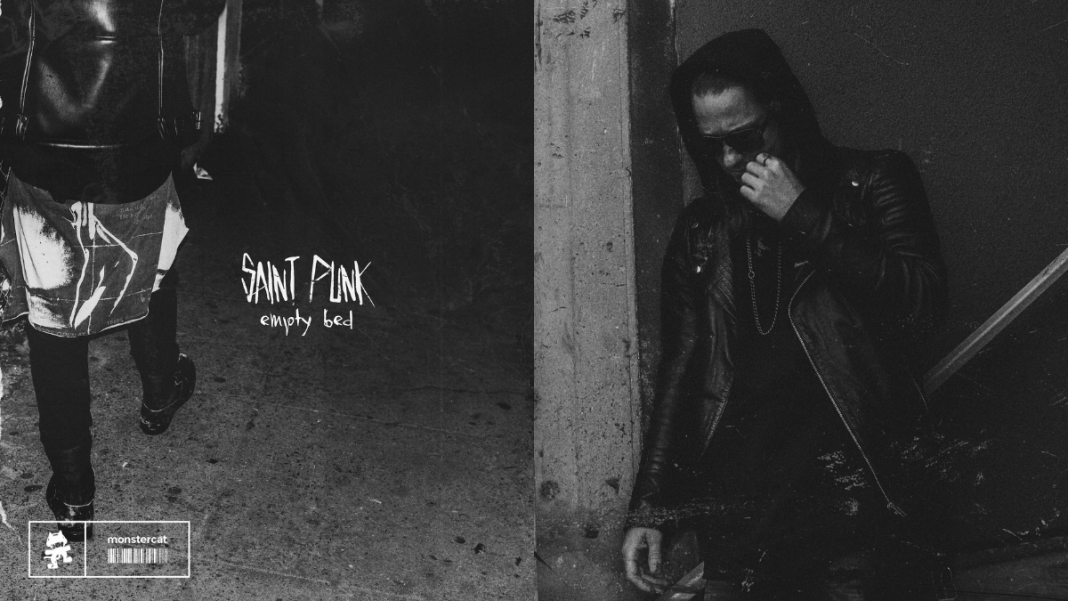 The track opens up with an ominous 4/4 beat, as the deep vocals sift into the track. As we head into the chorus, the track hushes as the vocals take the spotlight and melancholic lyrics bring memories from a relationship into focus. Through the chorus, Saint Punk ensures that his signature sound is heard with vibrating bass riffs, deep zipping synth chords, and heavy grunge house drops. “Empty Bed” marks a shift in Saint Punk’s production repertoire, exploring a more main-stage sound while maintaining his signature grunge house flair.

While the world quarantined, Saint Punk took the palpable frustration felt in 2020 and expressed it through production, never taking a rest from churning out heaters. He kicked off a series of releases with “Molotov Cocktail,” a cathartic expression of disdain with police brutality and a protest anthem in its own right that saw support from the likes of What So Not, Black Tiger Sex Machine, Codeko, Drezo, and Styles & Complete. Following “Molotov Cocktail,” Saint Punk brought his grunge house sound to Don Diablo’s Generation HEX label with “Fight,” a release filled with rumbling bass lines and dark drum breaks.

Finishing off the year strong, Saint Punk unleashed music monthly, including his STMPD debut “It’s Alright (Not),” — a driving, staccato track that seeks to remind his listeners that they can still find happiness through music. November saw Saint Punk’s return to Thrive Music with “Light ‘Em Up,” a high-octane follow-up to “Everybody” which released on Thrive Music earlier in the year. Saint Punk capped off 2020 with his grunge house treatment of Ookay and Cesqeaux’s “The Pit,” his debut release on Ookay’s The Woodwerk imprint.

Saint Punk also commits to making himself a source of information for fans, sharing his studio knowledge with his Band Practice YouTube series, bringing fans behind the curtain and showing them just how his studio magic is made.

Utilizing his rock background, Saint Punk creates the perfect blend of grunge roots with today’s evolving electronic scene, producing a new style of enticing dance music that has been coined as “Grunge House.” Over the course of 2019, Saint Punk released numerous tracks, including four Graffiti Mixes, which resulted in “Vol 4” airing on Diplo’s Revolution. Hitting a multitude of genres, Saint Punk pushes the limits with his bass-heavy bootlegs, including remixes for Pusha T, DIPLO, Nirvana and The Chainsmokers with Five Seconds of Summer. In addition, Saint Punk had officially remixed Matroda and BRUX’s “True G” on Dim Mak and has created a fresh infatuation with originals such as “Daddy” and “Menace” that were both released on Tchami’s label, Confession.

Concluding 2020, the producer dropped a gritty dance floor banger “911” featuring J that you can stream on Armada/Graffiti Records. Saint Punk continues to bring his street style potency in 2020, diving in with his first official remix of the year, grandson’s “Die Young.” He has continued stomping the streets with the release of “Actin Up”, “Warning”, and “It Never Stop”. Heading into Summer 2020 amidst a global pandemic, Saint Punk has not shown any signs of slowing down musically. He has released “Everybody” via Thrive, his “Guttah” Remix EP with 5 promising artists around the world, “Molotov Cocktail” via his imprint, Graffiti Records, gaining support from Spotify, Apple, and Deezer, “Brake” with Swedish trio, BROHUG via Armada Music, and now most recently “Fight” with Don Diablo’s Generation HEX label! Next up is “It’s Alright (Not)” which will make Saint Punk’s debut on Martin Garrix’s label, STMPD. With 2020 nearing an end, Saint Punk will continue his strenuous release schedule with Thrive and a surprise to top off the year.