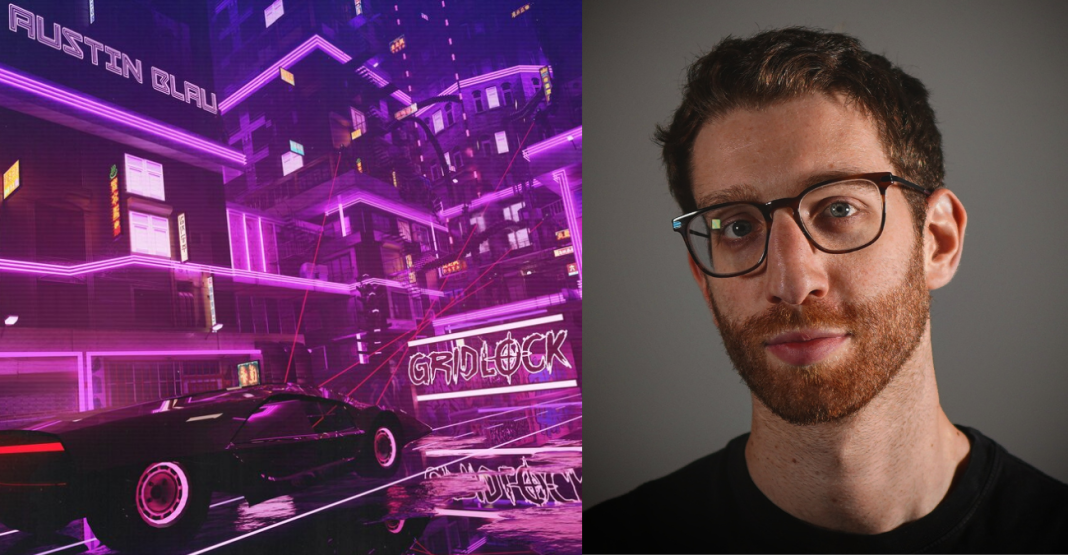 Our featured single, ‘Gridlock’ by Austin Blau, is out now and available to stream on all major streaming platforms! The single lasts around three minutes and sits at a steady 105bpm. The track was based on the idea of “driving around in a futuristic city, and using certain illustrations as inspiration to try and create the appropriate space and atmosphere to achieve that mood”.

‘Gridlock’ commences with an eighteen-second introductory section that features an intense riff that is met with a subtle percussive build; setting the tone for the track and cultivating anticipation for the initial drop. The main beat kicks in at the 0:18 mark and drives the rhythmic intensity of the instrumentation. A swirling synth is panned throughout the mix and adds an atmospheric depth to the overall sound, without detracting from the catchy hook riff.

The beat systematically drops out of the mix, check out 1:32 to 1:50, leaving a single kick to carry the beat; delivering the perfect amount of dynamic diversity to keep this track engaging from start to finish. By the time this single draws to a close, you’ll find yourself lost in the synthwave-styled flow and in need of hitting that repeat button for another listen.

From the well balanced production, to the creative compositional arrangement, fans of Austin Blau, as well as those who appreciate new and creative music, will definitely want to hear this single. Make sure you follow Austin Blau on social media to keep up to date with upcoming releases and performances!

Austin Blau is an up and coming artist who burst onto the streaming scene in 2018. Having composed his own original music for the past eight years, Austin Blau has become known for specializing in “video games, film, television and commercials”. Although he receives creative inspiration from a number of styles such as dark electronic, metal and hard rock, Austin Blau combines a variety of compositional elements to form his unique sound.