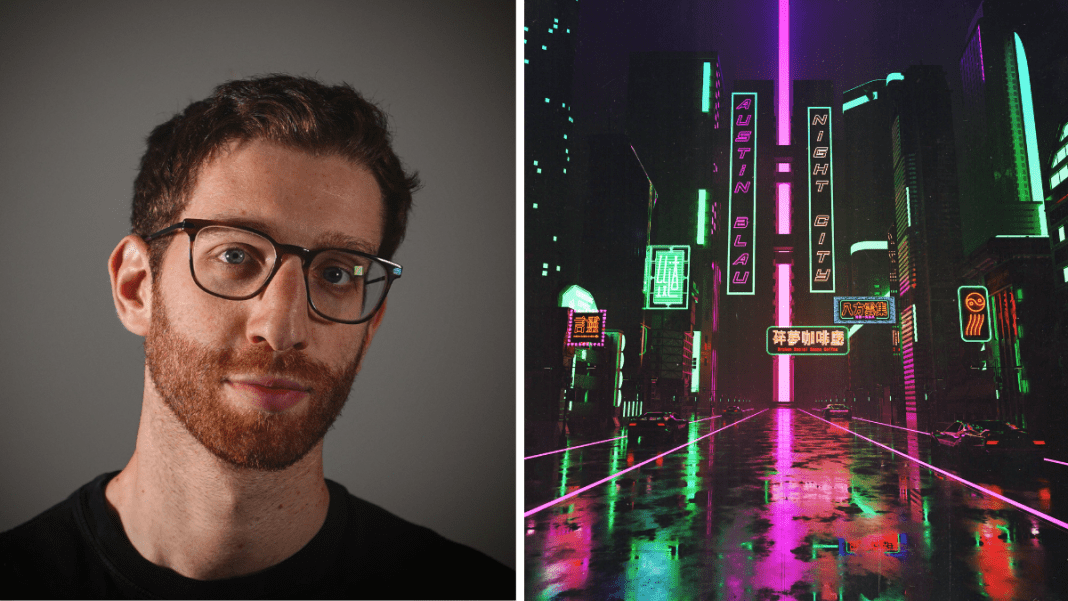 Austin Blau is a music composer of 8 years specializing in video games, film, television, and commercials who’s musical styling is considered to be Dark Electronic music and Metal/Hard Rock music. Austin’s music is often cited as being heavily distorted, bombastic, and rhythmically driven. He is often compared to artists such as Mick Gordon, Gessafelstein, and Hyper. Austin is also an accomplished audio engineer, both live and in the studio. He has toured nationally and internationally numerous times on different musical occasions. He also plays guitar, bass, and has a solo album, aptly titled, Austin Blau “Divinity”. Night City is the first song in a string of new tracks coming out more consistently next year with at least 3 other singles coming out in the first half of next year.

I got started playing and writing music from inspiration from Guitar Hero in 2005. From there I ended up playing a couple of different instruments and eventually writing music that some of my friends said sounded like it could be in a video game. So I recognized what I truly wanted to do and started working at that, all the way till now with 15 games under my belt as a music composer. Most of my influences actually come from people who create vibes rather than similar-sounding songs, like Antonio Carlos Jobim, Devin Townsend, and Golden Features. Dream collaborations would be Odesza for sure and Benjamin Clementine.

Tell us about your latest release “Night City” what was the inspiration behind this track?

The inspiration for Night City was 100% in the Cyberpunk genre. I made the song to be an homage to cyberpunk lore from the board games and from the movies. The new Cyberpunk 2077 trailer footage also became a great inspiration for the style of the music. I wanted to actualize the feeling that the City of Night City gave me.

I have a video game that starts production soon, but I can’t talk about that just yet. The next thing you’ll see from me besides some of the smaller games I work on frequently will be a new dark synth-wave track sometime next month.

As a producer, it’s definitely tougher to collaborate with people because of the pandemic, but I would say the general anxiety of Covid19 has been the factor that affects me more on a day to day basis. My writing and productivity haven’t suffered, but creativity has dropped once or twice at the beginning of the pandemic when my mind had been preoccupied with the virus and how it affected my friends and family. I would say it hasn’t given me the opportunity to focus on production, it has personally distracted me from my production if anything.

I love playing golf as much as I can. It’s been the sport of my family for a long time, and for me has become a form of meditation because of the way it distracts me from my passion and work in music, which nothing else can do.